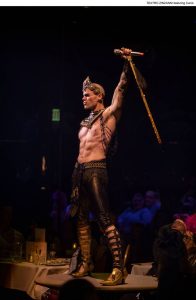 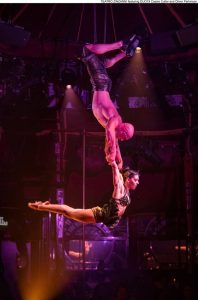 After 18 months of no indoor live entertainment, plays, concerts, comedy shows, or circuses, Teatro ZinZanni was the perfect way to re-introduce myself to all of these amazing forms of entertainment in one spellbinding show.  Entering the Speigeltent (“mirror tent” in Dutch), we were immediately transported to a timeless era of magical proportions.  The tent is full of mirrors which catch and play with the superb light cues incorporated into the show. The waitstaff efficiently and excitedly visited tables for drink orders and appetizers.  It quickly became clear that many of the staff working in the tent are much more involved in the show than their costuming would let on.  A man dressed as a chef did crowd work at the table encouraging us all to let go of all the troubles of the outside world.  We happily obliged.

And while I don’t want to describe any of the show in too much detail to ruin any of the magic, Teatro ZinZanni is an explosive celebration of joy for the senses.   When the show “starts”, it becomes clear that the traditional roles of circus clown, circus performer and emcee are blurred as the stars of the show thread loose narratives through the show while doing comedic sketches, acrobatic performances and singing at different points in the show.   Dinner is timed perfectly with the performances.  Service never feels rushed, nor labored between courses, except for maybe the finale of the show when we just didn’t want it to end. There are no lulls in the show.  At times you aren’t sure where to look as there are many things happening simultaneously.  My husband and I found ourselves chatting with couples from other tables with ease during the meal portions of the night.

Chef Caesar (Frank Ferrante) is masterful in his crowd work, improvisation and comic timing.  You never see him thinking of the next funny thing to say, the comedy just flows.  He and the lead comic Joe De Paul continually drew full belly laughs from the audience.  The two vocal leads, Storm Marrero and Cunio simply blow the roof off the tent in all the best ways.  Both are captivating and insanely talented.  I would buy tickets to either of their concerts.

The quality of acrobatic performers is amongst the best I’ve seen.  And as a circus performer in a previous life, I know the additional intensity up-close and personal performance can add to routines.

This is the third time my husband and I have seen Teatro ZinZanni in Chicago.  At this point, I can assuredly say, there is not a bad seat in the house; but the additional ticket price to sit near the inner circle simply adds to the intimate magical nature of the show.  Each experience has been unique in its own way.  And while I refuse to say which was my favorite; I can say if you have seen the show before and liked it, you will continue to be impressed; I would not miss this cast of the show.  It also did not go unnoticed that this show is VERY queer-friendly.   From RuPaul and Lady Gaga in the preshow playlist to the costuming of Cunio (which is STUNNING) it is clear that the show understands how fun it is to be fabulous!

After 18 months, it was great to escape into the Speigeltent and the magical world of Teatro ZinZanni.  The experience left me full—of food, of joy and of awe.

TICKET INFORMATION
Individual tickets, which include a four-course meal, are on sale now and range in price from $119 – $189. Front Row VIP
tickets are available at a premium price. Limited à la carte “show-only” tickets will also be available for $69. Individual
tickets will be available by visiting zinzanni.com/Chicago or by calling (312) 488-0900. Tickets are available now for
groups of 10 or more by calling Broadway In Chicago Group Sales at (312) 977-1710 or emailing
GroupSales@BroadwayInChicago.com.